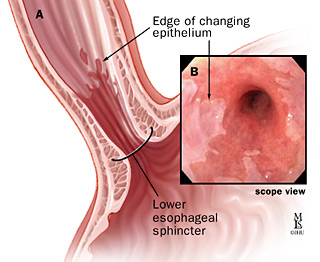 Although “heartburn” is often used to describe a variety of digestive problems, in medical terms it is actually a symptom of gastroesophageal reflux disease. In this condition, the acids from the stomach reflux or accidently “back up” into the esophagus (food pipe). Heartburn is described as a harsh, burning sensation in the area in between your ribs or just below your neck. The feeling may radiate through the chest and into the throat and neck. Many adults in the United States experience this uncomfortable, burning sensation at least once a month. Other symptoms may also include vomiting, difficulty swallowing and chronic coughing or wheezing.

When you eat, food travels from your mouth to your stomach through a tube called the esophagus. At the lower end of the esophagus is a small ring of muscle called the lower esophageal sphincter (LES). The LES acts like a one-way valve, allowing food to pass through to the stomach. Normally, the LES closes immediately after swallowing to prevent back-up of stomach juices which have a high acid content. Heartburn (Acid reflux) occurs when the LES does not function properly, allowing acid to flow back and burn the lower esophagus. This irritates and inflames the esophagus, causing heartburn and eventually may damage the esophagus.

What contributes to Heartburn (GERD/Acid Reflux)?

Some people are born with a naturally weak sphincter (LES). For others, however, fatty and spicy foods, certain types of medication, tight clothing, smoking, drinking alcohol, vigorous exercise or changes in body position (bending over or lying down) may cause the LES to relax, causing reflux or the accidental back-up of acid. A hiatus hernia (a common term for heartburn) may be present in many patients who suffer from heartburn (Acid reflux), but may not cause symptoms of heartburn.

Why is endoscopy necessary?

Endoscopy is done to have a thorough evaluation of your condition. Endoscopy assesses the condition of your esophagus (food pipe), stomach and the valve in between the stomach and esophagus. We can know how much damage has already been done by the acid to your food pipe. This may help us to know how much improvement occurs once we start the medications. Endoscopy also helps us to take a biopsy from stomach for H.Pylori – a type of bacterial infection which is a cause for stomach ulcers and if found positive can be treated with medication.

How is Heartburn (GERD/Acid Reflux) Treated?

Heartburn (GERD/Acid reflux) is generally treated in three progressive steps: 1. Life Style ChangesIn many cases, changing diet and taking over-the-counter antacids can reduce how often and how harsh your symptoms are. Losing weight, reducing smoking and alcohol consumption, and altering eating and sleeping patterns can also help. Losing weight if overweight, decreasing the size of meals, not lying down for two to three hours after eating and elevating the head of the bed six inches is part of medical management for this condition. 2. Drug TherapyIf symptoms persist after these life style changes, drug therapy may be required. Antacids neutralize stomach acids and drugs called proton pump inhibitors reduce the amount of acid produced by stomach. H Pylori eradication regimen is required if H Pylori infection is found on investigation. The main problem with antacids and acid reducing medication is that they are taken by patients without prescription in a random manner not knowing the exact duration for which it should be taken. So many patients take the medication only occasionally when having problem while some take it for years, both of which are not appropriate. 3. SurgeryPatients who do not respond well to lifestyle changes and drug therapy or who continually require medications to control their symptoms will have to live with their condition or undergo a surgical procedure. Surgery is very effective in treating heartburn (GERD/Acid Reflux). However, until recently this operation required a large abdominal incision resulting in significant pain after surgery and a recovery period of six weeks or greater. Recently, this technique has been modified using laparoscopic (minimally invasive) techniques that avoid the necessity of a large abdominal incision. Dr. Chirag Thakkar is a leading surgeon of laparoscopic antireflux surgery in ahmedabad.

When is surgery necessary?

People with severe, chronic esophageal reflux might need surgery to correct the problem if their symptoms are not relieved through other medical treatments. If left untreated, chronic gastroesophageal reflux can cause complications such as esophagitis, esophageal ulcers, bleeding, scarring of the esophagus and even cancer over a longer period. Laparoscopic antireflux surgery (also called Nissen fundoplication) is used in the treatment of heartburn (GERD/Acid Reflux) when medicines are not successful. Laparoscopic antireflux surgery is a minimally-invasive procedure that corrects gastroesophageal reflux by reducing the hiatal hernia, reconstructing the esophageal hiatus and reinforcing the lower esophageal sphincter.

How is laparoscopic anti-reflux surgery performed?

Laparoscopic anti-reflux surgery (commonly referred to as Laparoscopic Nissen Fundoplication) involves reinforcing the “valve” between the esophagus and the stomach by wrapping the upper portion of the stomach around the lowest portion of the esophagus. In a laparoscopic procedure, surgeons use small incisions (1/4 to 1/2 inch) to enter the abdomen through ports (narrow tube-like instruments). The laparoscope, which is connected to a tiny video camera, is inserted through the small incision, giving the surgeon a magnified view of the patient’s internal organs on a television screen. The entire operation is performed “inside” after the abdomen is expanded by pumping gas into it. Dr. Chirag Thakkar is having a very wide experience in performing these surgeries.

What are the expected results after laparoscopic anti-reflux surgery?

Studies have shown that the vast majority of patients who undergo the procedure are either symptom-free or have significant improvement in their heartburn (GERD/Acid Reflux) symptoms. The advantage of the laparoscopic approach is that it usually provides:

What are the risks of laparoscopic anti-reflux surgery?

What happens if the operation cannot be performed by the laparoscopic method?

In a small number of patients the laparoscopic method is not feasible because of the inability to visualize or handle the organs effectively. If at all the surgeon feels that it is safer to convert the laparoscopic procedure to an open one, this is not a complication but a sound surgical judgement. Factors that may increase the possibility of converting to the “open” procedure may include obesity, a history of prior abdominal surgery causing dense scar tissue or bleeding problems during the operation. The decision to perform the open procedure is a judgment decision made by your surgeon either before or during the actual operation. The decision to convert to an open procedure is strictly based on patient safety.

Are there side effects to this operation?

Long-term side effects to this procedure are generally uncommon. Some patients develop temporary difficulty in swallowing immediately after the operation. This usually resolves within one to three months after surgery. The ability to belch and or vomit may be limited following this procedure. Some patients complain of stomach bloating or more frequent passage of flatus. The subjective improvement in symptoms varies among patients with majority reporting significant improvement and others reporting marginal improvement. Rarely, some patients report no improvement in their symptoms.